When, Where, and Why to Include Hashtags in Your Remodeler Marketing

Social media sites are constantly buying each other, changing their algorithms, and evolving their expectations of you as a remodeler. I know because I'm in it every day. It's important to recognize that there's a method to the madness - they're evolving to better suit the user. And you should be, too.

As you're evolving to suit your clients and leads, this requires staying up to date on trends. We know firsthand how time consuming this can be, and we also know that time is a limited resource when you own a business or run a marketing department. So here's our down and dirty guide to hashtagging (the right way).

Let's take a step back.

Hashtags were born in 2007 out of user need on Twitter. Inspired by the use of the "hash symbol" (#) in a programming language to denote groups and topics, the sorting function of the hashtag dates back to the '70s. According to the credited creator, Chris Messina, the hashtag "was created organically by Twitter users as a way to categorize messages."

Essentially, the purpose of a hashtag is to sort content. This is used in different ways on different platforms, for example sorting imagery on Instagram as opposed to sorting tweets on Twitter or topics on LinkedIn.

Over time, hashtags have morphed to fit different platforms and various cultural trends. But the ultimate purpose has remained the same - to organize the internet.

Naturally, marketers ruin everything and we discovered that the right hashtag can help get you discovered, and learn how to be popular on social. It's really this exploitation (with the combination of proper usage) that you need to know to help get your content, imagery, and conversations found online.

Step 1: Hashtag Only on the Appropriate Platforms

Where are hashtags relevant?

While there are plenty of microblogging sites (such as Reddit, Tumblr, Quora, and countless more) that utilize hashtags, those aren't important for the vast majority of remodeling companies. That's not to say you couldn't market your business on these sites, but there's just not enough time in a day, and I know that. So let's focus on social media sites that you should be using and how to use hashtags properly on them.

Social Media Platforms Where Hashtags Are Most Relevant

Instagram is one of the best places for you to be as a remodeling right now! And you absolutely should be using hashtags here! You should definitely learn how to tag on instagram right now. In this instance, people looking for local remodeling companies will be searching through geo-tagged images that come up in their hashtag searches on the Instagram app. In mid 2018, Instagram updated its feed algorithm after backlash from removing chronological feeds to a more similar format of "newer first" and also created the opportunity for users to follow hashtags.

Tiktok utilizes hashtags, but if you ask someone, almost no one has used hashtags to search for content directly. That doesn't mean they won't help you reach new audiences. Using hashtags can help the Tiktok algorithm categorize your content so that people can more easily find it!

Twitter basically runs on hashtags. This is where the hashtag in its modern form was originally created, and it is still the currency of this platform. Hashtags on Twitter sort content, add context, boost popularity with sarcasm and humor, and can help your company be found with the right hashtags.

Facebook doesn't require hashtags for searching. Ever since the introduction of the Graph Search functionality, Facebook has become its own mini search engine. And just like you don't use hashtags on Google, you don't need to use hashtags to search on Facebook. The only time I do recommend using hashtags on Facebook is in the promotion of a specific campaign, such as with the #MeToo statement that swept the nation.

LinkedIn is nuanced when it comes to hashtags. For example, it's obvious to any experienced user that you're simply cross-posting with marketing automation if you use hashtags incorrectly in your posts. Your profile and articles on LinkedIn, however, support properly used hashtags since the platform's newest update in early 2017. And since late 2018, you are now able to follow #hashtagged topics on LinkedIn such as #MarketingStrategy to see what others are sharing related to that theme.

Step 2: Place Hashtags in the Right Location Within Your Posts

I can't believe it's #Saturday! I'm going to take my #dogs for a #walk at the #park in #COS and then hopefully grab a few #drinks #booze #beer with #friends! @beckyoninsta is bringing @oldyellerdog with her! #allarewelcome #ushouldcome #ff

Awful, right? It's actually tiring to get through posts and captions that are drenched in hashtags. No one wants to read your over-saturated post begging for likes and follows.

Instead of exhausting your followers with a beautiful picture of a newly remodeled kitchen followed by a paragraph with interspersed hashtags, give the users what they want. Storytelling with streamlined searchability.

Again for those in the  - social media users want storytelling with streamlined searchability. 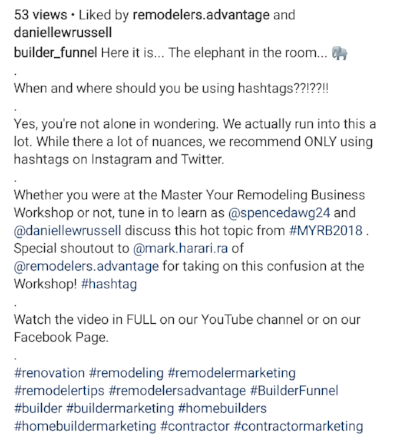 Structuring an Instagram Caption with the Proper Hashtag Usage

Picture your target audience. Maybe it's multi-generational families looking to build an addition for their in-laws to move in with them. Or maybe you're trying to attract young professional couples without kids looking to renovate their kitchens. Great - notice how in both instances you are trying to pull in people to your social media site.

People are not bots. We don't need to read hashtags to crawl a site and understand what was posted. People are drawn to stories, beautiful imagery, and smiling faces.

So here's the right way to include hashtags in your posts on relevant social media platforms.

Instagram is perfect for telling a story. Post your best professional photography of your most recently completed project, and tell the story of that project. Maybe you describe the clients you worked with, or maybe you describe the job details and all the challenges your team overcame together.

At the end of your caption, feel free to throw in a couple hashtags (i.e. #HomeIsWhereTheHeartIs #InteriorInspo), but save your barrage of hashtags for the very end of your post. A couple of ways to split up the hashtags from your story are the space method or the comment method.

When using the space method, simply return a few lines adding either a period (.) or a dash (-) to hold the space. Then hashtag your heart out.

When using the comment method, you would publish your post with no to minimal hashtags as aforementioned. Once the post is live, you can stuff your hashtags (30 maximum) into a comment (still on your business page).

Both of these Instagram hashtagging methods encourage storytelling and streamlined searchability. Your hashtags don't interrupt your story and your posts will still come up whenever that term is searched.

Twitter is simple. While anything goes really, we always recommend saving your hashtags for the end of your tweet. Just as on Instagram, people are drawn to stories. We're not bots, so don't treat us like it!

Let's be honest. Trying to grow a following on any social media platform can be ugly in the beginning.

You're still testing. Well, as marketers, we think you should always be testing and measuring and analyzing. But realistically, once you've found a strategy that's working for you, your profiles quickly become more predictable.

When you're first starting out, however, you might have hashtags all across the board, pictures of your office dog mixed in with remodeling projects, and maybe even a selfie or two of you drinking coffee in the office or at a job site. And that's okay! Test, test, test!

Once you know what your target audience is responding to, it's time to focus. But with years of testing and dozens of clients on which to test, I can try to cut your "testing time" down.

Keep in mind that your hashtags should be related to your post. There are a few ways to accomplish this:

Regardless of the purpose of your post, your hashtags should match your intent. Be sure to do the research of what other companies, posts, and styles come up when you search a hashtag before you use it. You don't want to be lumped into the wrong category just because a hashtag receives more searches.

Quality trumps quantity when it comes to hashtags. Take the time to figure out what hashtags your leads were using when they found you and eventually converted into clients.

Your target audience generally thinks alike - so reach them, not everyone.

Don't be afraid. You're ready.

If you're looking for a little help with getting started, we have a solution for that.

Imagine a world where you aren't rushing every Tuesday night to figure out the perfect Facebook post or the right Instagram hashtags. In this world, you're sitting at home having a family meal and a glass of wine instead of tapping away on your phone making sure you're on social media.

You're already working so hard, and you're so good at what you do. Maybe it's time to let us do what we're good because you deserve a break. You deserve your social media to be done for you - and by a pro.

That's where we come in. Learn more about our Social Media Done for You program and how we can help make your social media woes disappear (into leads)!

There are a lot of caveats when using hashtags. this blog clears the air so I can stop cringing every time I'm thumbing through Facebook or Instagram.

Leave outdated tactics and ineffective strategies behind. Grow your audience, improve engagement, and generate leads through the most popular social networks. 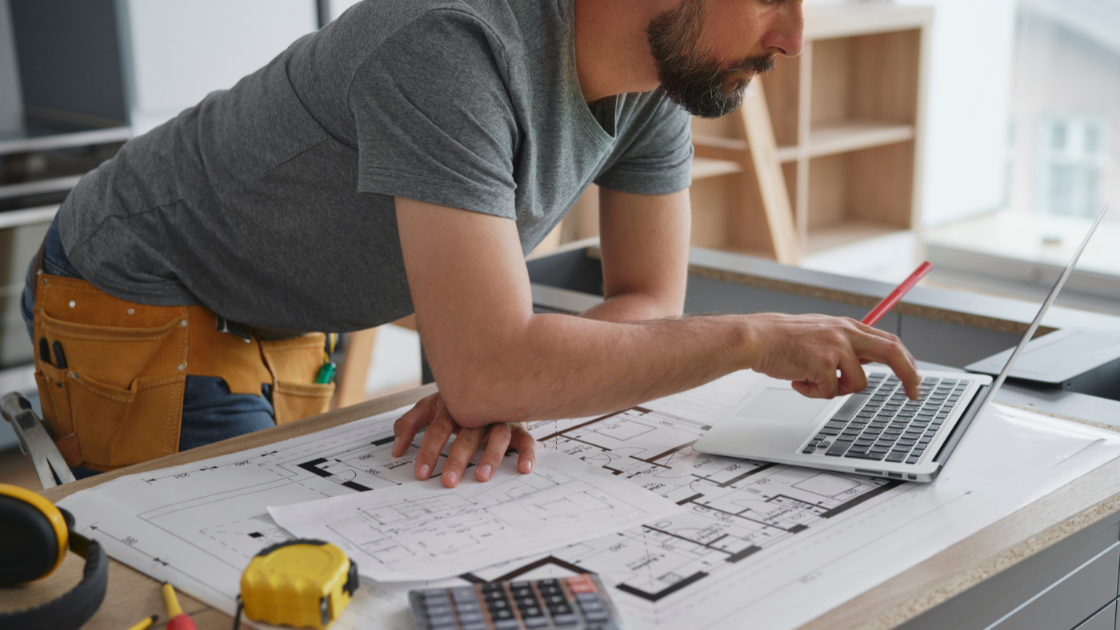